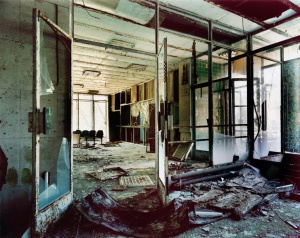 From now until 2 August, the 303 Gallery in New York goes Cold War with an eponymous exhibition by the British artist duo Jane and Louise Wilson. The twin sisters have spoken of their fascination with ‘dark tourism’ and the ‘atmosphere of fear’ they experienced during their childhood in the Cold War.

Here they present photographs, sculptures and installation pieces, including Atomgrad, Nature Abhors A Vacuum, depicting the abandoned Ukrainian town of Pripyat which used to house the factory workers of Chernobyl. This series of photographs was commissioned by Forma to mark the 25th anniversary of the 1986 nuclear disaster.

One thought on “Exhibition of the Month: Jane and Louise Wilson”