Born in Grand Forks, North Dakota in 1933, James Rosenquist began his career as a painter of commercial billboards. Images from the world of advertising have continued to permeate his work, but his vibrant, multi-referential style has also lent itself perfectly to absorbing and critiquing the politicised iconography of the Cold War.

While at the forefront of the American Pop art movement in the 1960s, Rosenquist took inspiration from the prevalent social, political and economic issues of the day: from America’s rapidly-expanding middle class and the Civil Rights Movement to the Space Race and the fear of nuclear war. During this time his fragmented, collage-like works often incorporated images taken from the pages of Life and Look, the American magazines which chronicled the country’s Cold War experience.

Rosenquist’s engagement with the politics of the Cold War is epitomised in his most famous work, F-111. Begun in 1964, this 86-foot-long painting depicts the eponymous fighter-bomber, in Rosenquist’s words, ‘flying through the flak of consumer society to question the collusion between the Vietnam death machine, consumerism, the media, and advertising’. What at first appear as glossy commercial images belie darker references to war and destruction, pointing to the link between rampant consumerism within the United States and the country’s military operations overseas. The anti-war sentiment he expressed in this painting was followed up in personal action, as Rosenquist was jailed in 1972 while protesting against the Vietnam War.

James Rosenquist was the subject of a huge retrospective at New York’s Guggenheim Museum in 2003-04, which is a great starting point for anyone wishing to find out more about this work. 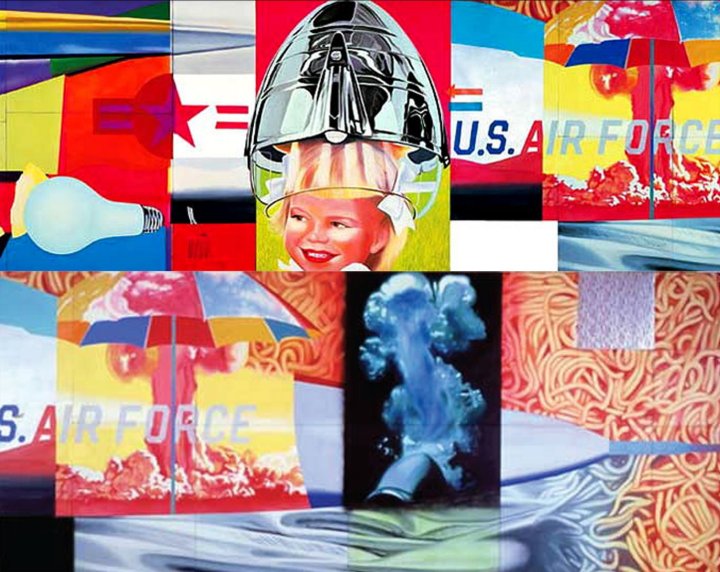