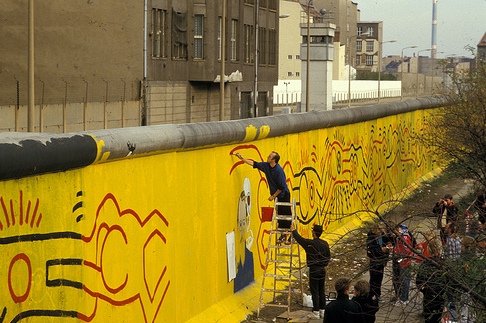 On 13 August 1961 construction started on the Berlin Wall, tearing apart the German capital. For the next 28 years, the Wall would be a symbol of Soviet oppression and a literal representation of the ‘Iron Curtain’ between East and West.

With the rise of the graffiti art movement in the 1980s, the West Berlin side of the Wall became a Mecca for street artists. Keith Haring, the New York artist credited with bridging the gap between the street and the gallery, was invited by the Director of the Checkpoint Charlie Museum to paint on the Wall during a visit to Europe in 1986. On 23 October Haring began work on his 350-foot mural, intended to symbolise the solidarity of the divided peoples of Berlin.

In Haring’s words: ‘I decided on a subject, which is a continuous interlocking chain of human figures, who are connected at their hands and their feet – the chain obviously representing the unity of people as against the idea of the wall. I paint this in the colors of the German flag – black, red and yellow.’