On the evening of 20 August 1968 the armies of the Warsaw Pact, the Soviet-led military alliance, invaded Czechoslovakia. During the night, hundreds of thousands of soldiers flooded into the country, bringing an end to the liberalising reforms of the Prague Spring. 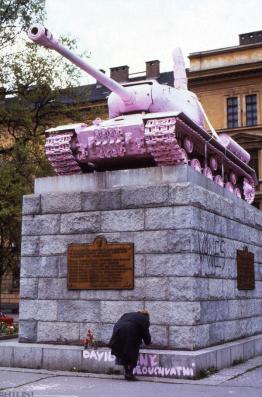 The epic scenes of Soviet tanks entering the Czechoslovak capital brought new significance for one Soviet tank that had long stood in Prague. Monument to Soviet Tank Crews was dedicated in 1945 to commemorate the liberation of the city by the Red Army at the end of World War II. But after 1968 the memorial came to symbolise the invasion and the heavy Soviet military presence that remained in the country for two decades.

On the morning of 28 April 1991, residents of Prague awoke to find the tank painted bright pink. On its roof stood a huge erect middle finger. In a provocative flourish worthy of the master of readymades himself, Marcel Duchamp, the monument’s base was daubed with the signature ‘David Černý and the Neostunners’. The offending art student, future enfant terrible of the Czech art world, was swiftly jailed for causing a public disturbance and the tank was repainted green.

But it didn’t end there… A few days later on 12 May members of the newly-elected parliament together repainted the tank pink, signifying their commitment to the end of Soviet authority. Černý was released and the Pink Tank was removed from Prague, pre-empting the collapse of the USSR later that year. For once, it seemed, art had trumped politics.

5 thoughts on “The Return of the Pink Panzer”