This week the United States celebrated the 50th anniversary of the March on Washington which took place on 28 August 1963, culminating in Martin Luther King, Jr.’s landmark ‘I Have A Dream’ speech.

The following year, one American artist put brush to canvas to make his own visual statement in support of the fight against racial inequality. Norman Rockwell was long known as the creator of popular patriotic cover images for the Saturday Evening Post, most famously the Four Freedoms series, published in 1943. However, Rockwell ended his contract with the publication in 1963 due to his desire to engage with more challenging political themes, instead commencing a collaboration with rival magazine Look.

On 14 January 1964 Look published a centrefold featuring Rockwell’s latest artwork, The Problem We All Live With. Focusing on the unsettling events of 13 November 1960, the painting depicts 6-year-old African-American schoolgirl, Ruby Bridges, walking to her first day at an all-white school, accompanied by a bodyguard of four US Marshals. The wall behind her is graffitied with crude racial slurs and shows the remains of a tomato that had been hurled at the little girl. To this day, the image is shocking and deeply poignant. But as a positive indication of the steps America has taken towards tackling the issues raised, the work was hung in the White House from July to October 2011, in response to a personal request to President Obama by Ruby Bridges herself. 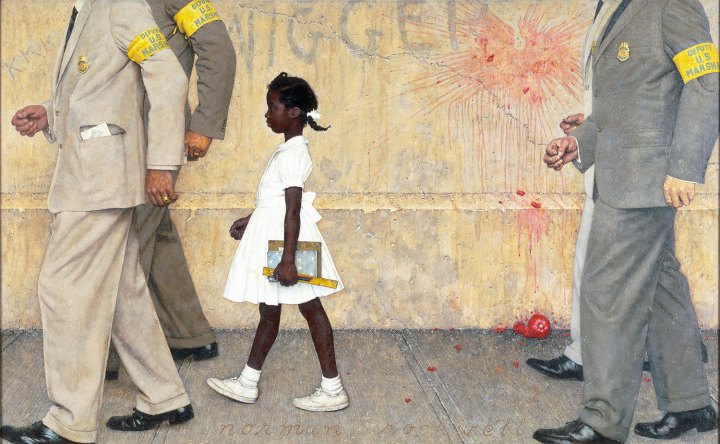