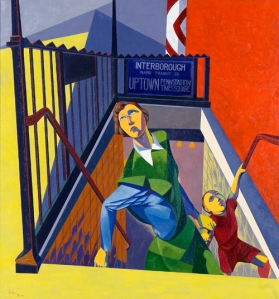 Already a year into its 4-venue tour, Art Interrupted: Advancing American Art and the Politics of Cultural Diplomacy continues to fascinate audiences across the United States with its insight into one of the most controversial episodes in Cold War art history.

Art Interrupted reunites all but 10 of the original 117 paintings from the notorious Advancing American Art exhibition of 1946. Organised by the US Department of State, this earlier exhibition was intended to use the example of ‘free’ American art to sell the benefits of American global dominance over Soviet hegemony in Latin America, Eastern Europe and Asia. But in an ironic turn of events, the inclusion of artworks by supposed ‘subversive’ artists led to calls for censorship in the United States. As the uproar escalated, the exhibition was cancelled, another victim of the red-baiting hysteria in post-war America. Art Interrupted continues at the Indiana University Art Museum until 15 December 2013, before it draws to a close at the Georgia Museum of Art on 20 April 2014.

In addition to the excellent Art Interrupted catalogue, you can read more about the 1946 exhibition in two earlier books: Advancing American Art: Politics and Aesthetics in the US State Department Exhibition, 1946–48 by Virginia Mecklenburg and Margaret Lynne Ausfeld [Montgomery Museum of Fine Arts, 1984]; and Advancing American Art: Painting, Politics, and Cultural Confrontation at Mid-Century, edited by Taylor D. Littleton and Maltby Sykes [University of Alabama Press, 2005].