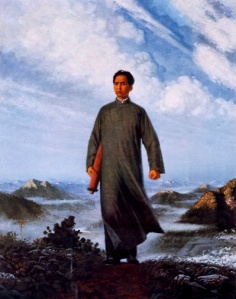 Although the British Library’s fascinating exploration of Propaganda: Power and Persuasion closed last month in exhibition form, the eponymous catalogue is still available to introduce people to this elusive term which has dominated so much of human experience over the last century.

Authored by David Welch, Professor of Modern History at the University of Kent and Director of the Centre for the Study of War, Propaganda and Society, the book overviews instances of state propaganda from ancient Rome to the present day in a myriad of manifestations. The narrative shows how propaganda and the visual arts have been entwined since the outset, with statues and portraits of ancient rulers being sent out across their empires to strengthen their personality cults and mark their authority.

Examples of films, books, currency, music, newspapers, games and web pages put into context propagandistic images from the Cold War. One of the most striking is the infamous oil painting of Mao Zedong in his youth, supposedly leading revolutionary action at the Anyuan coal mine in 1921. The image is estimated to have been reproduced as more than nine hundred million posters which were distributed across China during the Cultural Revolution.

On sale from British Library Publishing.