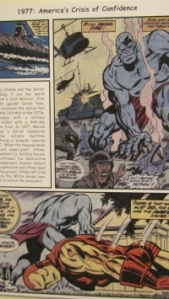 An innovative exhibition recently opened in the History Department of Boston College. Undergraduate students of the department’s ‘Making History Public’ course have joined forces with librarians to mount Revealing America’s History Through Comics, a display that chronicles changes in 20th-century American politics and culture through the lens of comic books. From Captain American’s response to the Watergate scandal and the assassination of JFK to the growth of anti-war activism, the Cold War is a recurring theme. The exhibits are selected from popular Marvel and DC titles ranging from the 1940s to the present day, with all items borrowed from the large collection of comic books held in the Edward J. Kane collection of Burns Library.

Meanwhile, another student-created exhibition with links to the Cold War runs at Northwestern University in Evanston, Illinois. Work Print Protest Repeat is a single-room accompaniment to the excellent main gallery exhibition, The Left Front: Radical Art in the “Red Decade,” 1929–40. Undergraduate students in Northwestern’s History of Art department have juxtaposed prints created during the Great Depression with those of politically-engaged artists working later in the century.