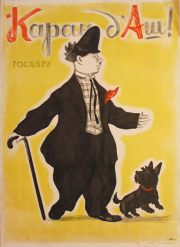 Is It Propaganda? Or Is It Political Art? is the latest exhibition to open at the Charles Krause/Reporting Fine Art Gallery in Washington, DC. Assembled from the personal collection of the veteran PBS and Washington Post foreign correspondent, the exhibition features political and poster art from Cold War USSR, Cuba, Ukraine, China, Poland, Germany and the US.

Krause became a collector of art during his 30 years covering wars and revolutions across the Americas, Eastern Europe and the Middle East. He was particularly interested in art that was able to overcome language barriers by the strength of its visual imagery, engaging with work often dismissed from consideration by mainstream galleries and museums. In this exhibition, Krause invites visitors to question the line between ‘political art’ and ‘propaganda’ and to consider the value of the art object outside its political content.

The exhibition remains open during weekends and during weekdays (by appointment) until 31 May 2014.