In 1953 a Cold War spy mission, jointly staged by the CIA and MI6, would profoundly change the direction of global politics and help build the fragile world in which we live today. Between 15 and 19 August, American and British agents orchestrated the Iranian coup d’état, which overthrew the democratically-elected Prime Minister of Iran, Mohammad Mosaddegh. 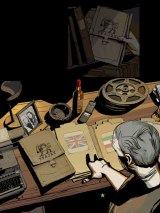 Mossadegh’s attempts to nationalise the Anglo-Iranian Oil Company and retake control of the country’s oil reserves, seen by many Iranians as an exploitative hangover from British imperialism, made him powerful enemies. The coup – known by MI6 as ‘Operation Boot’ and to the CIA as ‘Operation Ajax’ (TPAJAX) – crushed Iran’s fledgling democracy. In its place the Shah was granted absolute rule of the country, with powerful backing from the United States, until the Iranian Revolution of 1979 created an Islamic republic. Only on the 60th anniversary of the coup, in August 2013, did the CIA publicly admit its involvement.

These dramatic events are the inspiration behind the interactive graphic novel CIA: Operation Ajax. This tale of oil and espionage interweaves authentic CIA documents with over 210 pages of art to produce an innovative Cold War spy thriller. A more in-depth review is provided by Longbox Graveyard.

One thought on “The Graphic Art of CIA: Operation Ajax”