The killing of Los Angeles Times journalist Rubén Salazar on 29 August 1970 highlighted the impact that Cold War politics had on all sections of American society. On the day of his death, Salazar was reporting on a march organised by the Chicano Moratorium, a group protesting against the Vietnam War and the disproportionate number of Mexican-Americans who were serving or had been killed.

As the police staged an aggressive response to break up the peaceful rally, Salazar was shot in the head with a tear gas projectile by a sheriff’s deputy. As Salazar was a vocal critic of police brutality against Los Angeles’ Latino community many believed his death was premeditated. Yet although the inquest ruled a homicide, his killer was never prosecuted. 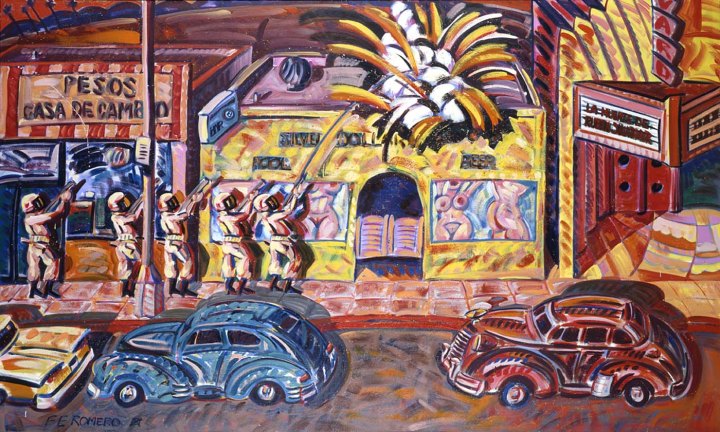 16 years later the tragic tale of Rubén Salazar was the inspiration behind a large canvas by LA painter Frank Romero. In the 1960s and ’70s, Romero had been part of the artistic circle Los Four, producing emotionally-charged murals that recorded political events affecting the Latino community. In Death of Rubén Salazar he combined this Mexican revolutionary tradition with the bold colours popular in the East LA barrio. In the painting, as police storm the Silver Dollar Bar where Salazar was shot, the movie theatre on the right announces its feature: La Muerte de Rubén Salazar.

You can read more about the painting on the Smithsonian American Art Museum website and listen to an interview with the artist here.