Having survived the horror of the World War I trenches as a teenager, celebrated English sculptor Henry Moore (1898–1986) continued to respond to the dramatic historical events he witnessed throughout his lifetime. 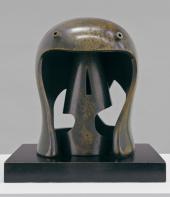 During the Cold War, Moore’s work was infused with the tensions of the era and his anxiety about the development of atomic weapons. In this strange new world Moore’s familiar combination of the human figure with organic forms expressed the vulnerability of mankind in the face of nuclear attack.

As the start of the Korean War threatened to unleash the world’s first nuclear conflict, Moore revived a theme that had first entered his work in 1939 at the onset of World War II. Between 1950 and 1952 the sculptor produced thirteen Helmet Head sculptures. These sinister robot-like bronzes, which he described as “disturbing and strange,” expressed a sense of entrapment in an oppressive environment.

Despite Moore’s support for the Campaign for Nuclear Disarmament (CND), in the early 1960s he accepted a commission that appeared to challenge this opposition. The 12-foot bronze sculpture Nuclear Energy was unveiled at the University of Chicago in 1967 to commemorate the first controlled, self-sustaining nuclear chain reaction which took place there in 1942. Yet while supposedly a commemorative piece, many have read its mushroom cloud shape as an anti-nuclear statement. In 1987, the city of Hiroshima purchased one of seven Atom Piece models of the sculpture.