What: Sculpture of the Martyred Intellectuals
Where: Mujibnagar Memorial Complex, Meherpur, Bangladesh

The Bangladesh Liberation War between East Pakistan and West Pakistan ended on 16 December 1971 with the establishment of the People’s Republic of Bangladesh in the east. Although only lasting 9 months, the war was shocking in its brutality. During a series of genocidal atrocities perpetuated by the Pakistan Army against the Bengali population, artists were targeted in a campaign to liquidate intellectuals, a strategy aimed at destroying the community’s cultural identity.

Two days prior to the surrender of the West Pakistanti forces, on the night of 14 December, over 200 leading intellectuals were arrested and executed. Alongside artists the victims included professors, doctors, engineers, journalists, poets and writers. The event is now commemorated in Bangladesh as Martyred Intellectuals Day. 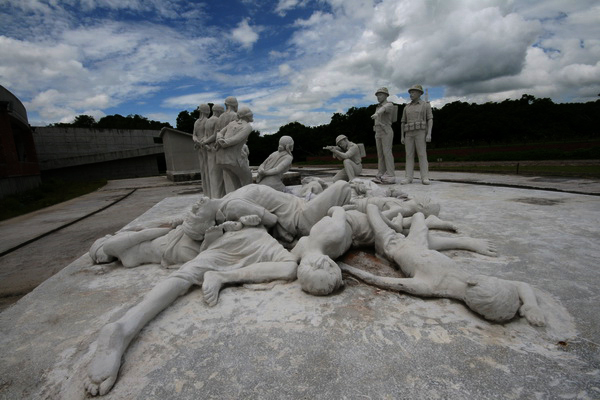 A group statue commemorating this event is one of a number of poignant works at the Mujibnagar Memorial Complex in the Meherpur District of Bangladesh. The memorial was built on the site of a mango grove where the country’s first independent government was sworn in.

You can see more photos of the Liberation War memorial and its sculptures at Flickr Hive Mind.