The Hayward Gallery’s new exhibition was already causing a media stir before it opened when a Cold War era guided missile was craned onto the roof on London’s South Bank. The weapon is part of artist Richard Wentworth’s contribution to History Is Now, an exhibition that sees 7 leading UK artists curate a room giving their own take on the last 70 years of British cultural history. 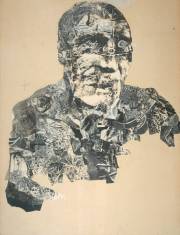 The Cold War inevitably looms large in many of the sections. Wentworth’s room, which brings the exhibition to a close, features key artworks from the period including Henry Moore’s 1950 bronze sculpture Helmet Head No. 1 and Reg Butler’s winning model for the infamous competition to design a Monument to the Unknown Political Prisoner. Other haunting artworks which recall the nuclear anxiety of the late 20th century include Head of a Man by Nigel Henderson, a collage of photographs that together form the mutilated head and shoulders of a man.

The theme of nuclear anxiety is also central to the atmospheric room curated by twin sisters Jane and Louise Wilson. Building on their recent photographic series about the Chernobyl nuclear disaster, the artists include references to Orford Ness in Suffolk, where the UK Ministry of Defence tested missiles during the Cold War, and the anti-nuclear protests at Greenham Common in Berkshire.

History Is Now: 7 Artists Take On Britain continues at the Hayward Gallery until 26 April 2015.

Image: Top – Nigel Henderson, Head of a Man, 1956. Photographs on paper on hardboard. Courtesy Tate; Bottom – View of Bloodhound Mark 2 Surface-to-Air Missile and Launcher, c.1965–66, on the roof of the Hayward Gallery, London.

One thought on “Exhibition of the Month: History Is Now”