On 13 April 1975, the start of the Lebanese Civil War was sparked by an incident known as the Bus Massacre. Early morning skirmishes on the streets of Beirut – between guerrilla fighters linked to the Palestine Liberation Organization (PLO) and right-wing Lebanese Christian militiamen – escalated dramatically, as the indiscriminate shooting at a church congregation led to a retaliatory assault on a bus full of Palestinian men, women, and children. From the late 1950s, the Cold War had caused the disintegration of Lebanese civil society, as Western nations and Soviet-aligned Arab countries frequently intervened in the domestic conflict between rival religious groups. Ill-feeling resulting from the Bus Massacre pushed this tension to breaking point, and Lebanon rapidly spiralled into a fully-fledged civil war that would continue throughout the 1980s. 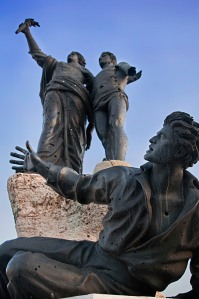 Working in the shadow of a vicious conflict that raged for almost 16 years and left one million people homeless, Lebanese artists were and continue to be affected powerfully by the country’s civil war. The tragic destruction of the capital city is epitomised for many in the broken, bullet-ridden remains of the Martyrs’ Monument. Completed by Italian sculptor Renato Marino Mazzacurati in 1960, the four-meter-high statue stands at the centre of Martyrs’ Square, so named after the Lebanese revolutionaries executed there by the Ottomans in 1916. During the civil war, this public space in the heart of downtown Beirut became the demarcation line that divided the city in half. Although restored in the late 1990s, the damage to the monument was preserved as a sign of the long years of suffering.

Beirut-born installation and video artist, Mona Hatoum, is just one of many artists who have produced work focusing on the Lebanese Civil War as a cathartic response to the havoc wrought on their homeland. Hatoum has returned to the image of the Martyrs’ Monument several times to commemorate the destruction of Lebanese arts and culture, as well as the psychological impact of the civil war on the Lebanese people. In 2008, she worked in collaboration with Iraq al Amir Women Cooperative Society to produce a small, simplified version of the monument in ceramics and stone. The following year, while she undertook a five-week residency in Beirut, Hatoum produced a second replica of the statue, this time a more faithful rendition in porcelain. Both sculptures feature the bullet holes and broken limbs of the mutilated bronze original and are entitled Witness, a word that personifies the Martyrs’ Monument as a silent witness to the civil war, and has its root in the Arabic word for ‘martyr’ (‘shahid’).

Hatoum’s return to the image demonstrates her interest in how the meaning of memorials changes over time, and also points to the effect of the civil war on her own sense of self, as an artist who identifies as Palestinian-British. In 2010, Hatoum used the title of the work for her homecoming solo exhibition at the Beirut Art Center.