The atomic bombings of Hiroshima and Nagasaki by the United States in August 1945 not only signalled the end of World War II, but also announced the start of the nuclear age which would be a defining aspect of the Cold War. The widespread revulsion in Japan at America’s actions would sit uncomfortably with the country’s reliance on the West for protection against the rise of communism in China, Korea, Vietnam and other neighbouring countries. After Japan agreed to enter into a security treaty with the United States in April 1952, the Allied Powers finally halted their occupation of the country, although under the terms of the agreement Japan was compelled to host a huge network of US military bases from which America waged the Cold War in Asia.

An engaging microsite published by the MIT Visualizing Cultures project tells a little-known story of four “reportage” painters working in Japan during the 1950s. Nakamura Hiroshi, Ikeda Tatsuo, Yamashita Kikuji, and Ishii Shigeo were all linked to the Japan Art Alliance, a post-war art group that advocated the creation of politically-themed realist paintings. In their works, the artists protested again Japan’s acquiescence to US domination and provided a vivid record of the difficulties faced by the Japanese people as their country entered into the Cold War.

Nakamura Hiroshi‘s paintings of the 1950s and early 1960s largely focus on the gathering protest movement against the US military presence in post-war Japan. Although he aspired to adhere to the Soviet-led art method of Socialist Realism, Nakamura’s works have a strong surrealist quality, while others have the appearance of contemporary street art. 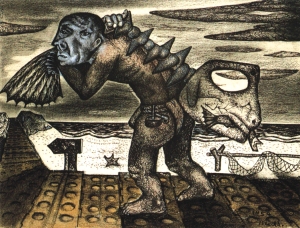 The Allied occupation of Japan was indirectly responsible for Ikeda Tatsuo becoming an artist. As a teenager, Ikeda was forced to train as a kamikaze pilot, and although the end of the World War II saved him from having to undergo a suicide mission, as a result of this training there were restrictions on his employment in occupied Japan. Ikeda subsequently used his art to highlight how the livelihoods of other Japanese had been damaged by the US military presence. His social realist paintings show the influence of Cubism, although Ikeda also produced more conventional images when as an impoverished artist he supported himself by painting portraits of American servicemen stationed in Japan. 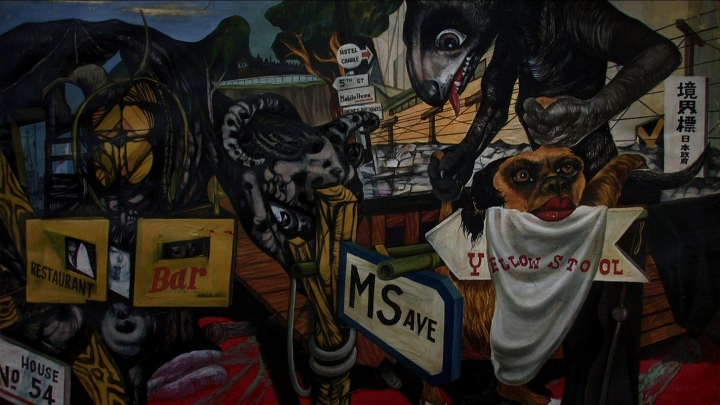 Yamashita Kikuji‘s post-war paintings often recalled his painful memories of being a soldier in the Japanese Imperial army, fighting in China. In the early 1950s, Yamashita briefly worked for the Japanese Communist Party to record instances of class warfare in Japan, but his surrealist paintings, which took inspiration from Salvador Dali and Hieronymus Bosch, made his work unpopular as a form of “communist” art. In works such as The Tale of New Japan, Yamashita strongly criticised America’s military presence and the corruption of the Japanese who profited from their country’s occupation. His paintings are often populated by dogs and other animals, as visual metaphors for the bestial behaviour of humans, including that of Yamashita himself: the artist never forgave himself for his participation in the torture and murder of a Chinese prisoner of war.

The last of the four artists featured on the Visualizing Cultures microsite is Ishii Shigeo. Although the artist tragically only lived to 28, when he finally succumbed to his lifelong battle with asthma, he left a large body of work. Most significant are the 15 paintings that Ishii produced between 1955 and 1957, under the collective title of Violence. These allegorical works document the psychological impact of Japan’s post-war struggles. Filled with small human figures falling and floating in sinister settings, these unsettling works depict the Japanese people as victims of the US-Japan security treaty, which the artist described as a “perfect crime”.

For a more in-depth account of these artists, I highly recommend exploring the microsite Protest Art in 1950s Japan by Linda Hoaglund, which was produced as a complement to Hoaglund’s 2010 documentary film ANPO: Art X War: