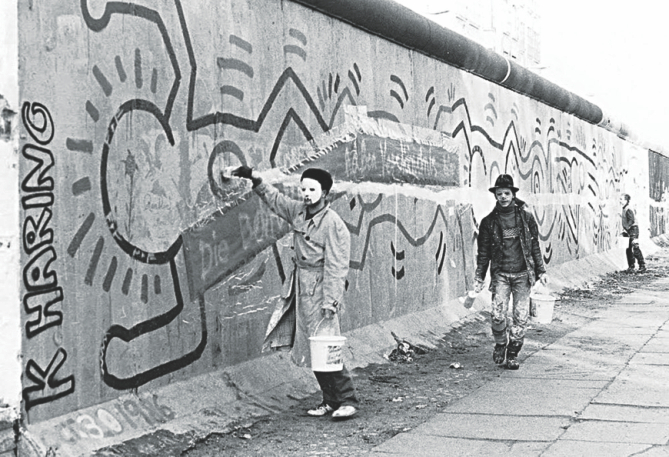 “We enjoyed painting a line through that one!”

The German journalist and author, Frank Willmann, recalled with glee the moment in 1986, when he and four friends daubed white paint across Keith Haring’s iconic Berlin Wall mural. This iconoclastic act was part of an art-activist stunt that stretched 3 miles along the infamous structure. Since the wall was suddenly erected on 13 August 1961, to separate the German Democratic Republic from the neighbouring Federal Republic of Germany, it had been a hated symbol of the Cold War divide between East and West. But by the mid-1980s, the western face of the wall had become a tourist destination, with visitors attracted by the growing number of artworks that adorned it following Thierry Noir’s first wall painting in April 1984.

Born in the East German city of Weimar in 1963, Willmann along with his friends – Frank Schuster, Wolfram Hasch, and brothers Jürgen and Thomas Onisseit – had grown up never knowing a world without the Berlin Wall. By their late teens, the group had begun to rebel against the government of Erich Honecker and the notorious Stasi. Between 1983 and 1985, the authorities agreed to let all five of the young troublemakers emigrate to the West, and they reconvened in Berlin.

Their experience of living on both sides of the wall made the five friends keenly aware of the devastating effect it had on the lives of so many German citizens. They were therefore infuriated to see the wall dismissed by many in the western world as “little more than a big canvas. They just didn’t care what was going on behind it.” The willingness of the West German authorities to pander to the wishes of a famous American artist was particularly irksome, and the five friends decided to retaliate when Haring’s paint was barely dry. 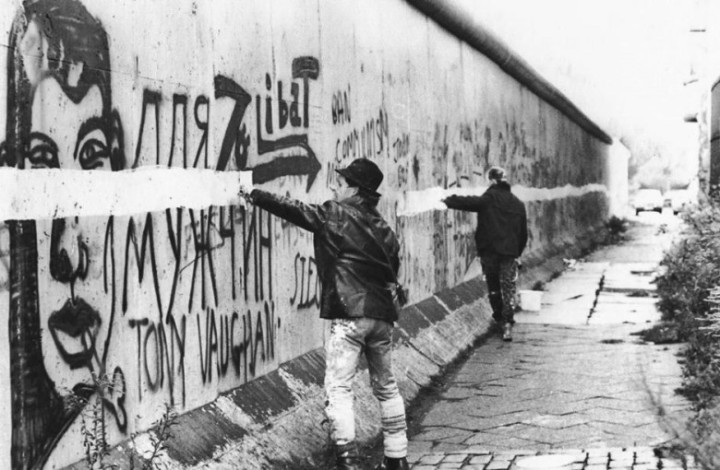 On 3 November 1986, armed with paint rollers and buckets, and wearing masks to conceal their faces, Willmann, Schuster, Hasch, and the Onisseit brothers embarked on their daring feat. They continued to paint an uneven white line for several hours, until eagle-eyed East German border guards surprised them by appearing through a secret door and dragged Hasch back to the GDR, where he spent 3 months in prison before returning to West Berlin.

As The Guardian newspaper reports, the men today give a number of reasons why they chose to paint on the wall, ranging from a desire to feel empowered and proclaim their move to West Germany, to a protest against the complacency of those fortunate enough to be living on the western side. In a surprising development, only in 2010 when Willmann began researching for a book about the project, did it come to light that Jürgen Onisseit – the friend who had first suggested the white line action – had once been a Stasi informant. In a bitter irony, this revelation has created a more unassailable division between the friends and brothers than any concrete wall.

One thought on “Painting Through the Berlin Wall”