As the US presidential inauguration approaches, provoking revulsion and celebration in various quarters, an exhibition at Hauser & Wirth’s New York gallery is reminding visitors of a Cold War precedent for the current political turmoil. Philip Guston: Laughter in the Dark, Drawings from 1971 & 1975 is devoted to the American artist’s satirical images of Richard Nixon, whose controversial presidency was brought to a premature end in 1974 following the infamous Watergate scandal. 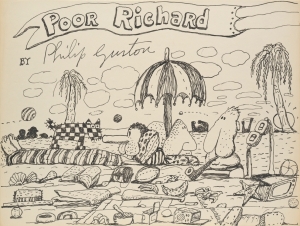 Philip Guston’s art had always been influenced by contemporary politics. Early in his career, as a mural artist, Guston created works in support of the falsely imprisoned Scottsboro Boys and travelled to Mexico to learn from revolutionary Communist artists including Diego Rivera and Frida Kahlo. In the 1930s, Guston worked for the New Deal art programmes, before joining many of his contemporaries in the late 1940s to pioneer Abstract Expressionism, typified in the painting of his high school friend, Jackson Pollock.

Guston began his Nixon drawings soon after he had returned to New York from a prolonged stay in Italy. He had fled to Europe in 1970 following a savage response by the New York art world to his abandonment of abstraction in favour of a dystopian and comically vulgar figurative style. This imagery, for which Guston is now best known, was prompted by the divisive atmosphere in the United States as the country faced up to its failure in the Vietnam War, social unrest raged in the aftermath of the assassination of Martin Luther King Jr., and neoconservatism began to  permeate government organisations. Guston later recalled, “What kind of man am I, sitting at home, reading magazines, going into frustrated fury about everything – and then going into my studio to adjust a red to a blue? … I am weary of all this purity”.

As Guston adjusted to life after abstraction, he turned to drawing to express his anger at the Nixon administration, just as the ‘Pentagon Papers’ scandal was uncovering the lies told to the American public about the military campaign in Vietnam. Guston took inspiration from his conversations with the writer Philip Roth, whose own aversion to Nixon simultaneously resulted in the satirical novel Our Gang.

The 180 pen-and-ink drawings on display at Hauser & Wirth are surreal, cartoonish and at times juvenile. Guston’s highly unflattering portrayal of Nixon sees the president depicted as a monstrous phallic figure, that in turn morphs into other ridiculous characters including a cat, a cookie, a lost astronaut, and a stone monument. The display includes both the Poor Richard series of 1971 and the Phlebitis series of 1975. These series respectively pour scorn on Nixon’s self-mythologisation through exaggerated tales of his youth and use the physical ailments of the by-then-resigned president to allegorise his moral decay. [Watch the ‘Poor Richard’ series on YouTube.] The exhibition also features several paintings on a similar theme, such as San Clemente, as well as more contemplative self portraits of the artist, lying alone in bed, unable to sleep.

There is still a month left to see the exhibition that Hyperallergic describes as “a tool kit for satirizing loathsome presidents”. Philip Guston: Laughter in the Dark, Drawings from 1971 & 1975 continues at Hauser & Wirth until 28 January 2017.

One thought on “Laughing at the President”