This snapshot of a man posing next to one of Henry Moore’s reclining figures appears unremarkable and similar to thousands taken every year across Britain, where the artist’s modernist bronzes are a common feature in sculpture gardens and public parks. But this image records a momentous and moving visit to the Henry Moore Studios & Gardens in Hertfordshire, England for Maks Velo, an Albanian artist imprisoned for his appreciation of Moore’s work. 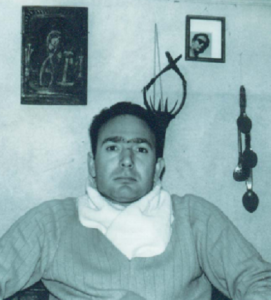 Maks Velo was born in Paris in 1935 and raised in Korçë in Albania, which at the time was a conservative and authoritarian republic that had recently claimed independence from the Ottoman Empire. By 1939, in the approach to World War II, Albania was invaded by Fascist Italy, and during the war it was occupied by Nazi Germany. The end of the war brought little relief, as the country was absorbed into the Soviet sphere of influence, and ruled over for forty years by the increasingly erratic and despotic dictator, Enver Hoxha. Despite these challenges, Maks Velo successfully trained as a civil engineer and architect in the Albanian capital of Tirana, before beginning a precarious career as an architect, artist and writer.

Hoxha was suspicious of intellectuals from the outset of his regime. Many of those who did not flee soon after he took power in 1944 were executed during a post-war witchhunt, while artists and writers continued to risk imprisonment and exile throughout Hoxha’s reign. The persecution was focused in particular on intellectuals who had travelled abroad, thereby stripping Albania of wider cultural references and forcing it into an artistic vacuum. In 1949, Socialist Realism was adopted from the USSR as the official creative style of Albania. Despite Hoxha’s acrimonious break in relations with the USSR in 1961, a rift that precipitated the dictator’s bizarre programme of bunkerisation, Socialist Realism continued to be enforced – although artists risked harsh punishments to test its boundaries. 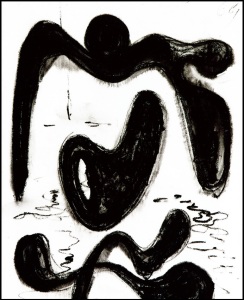 Maks Velo first saw the work of Henry Moore in 1969. By this time, organic forms reminiscent of Moore’s modernist outdoor sculptures were already appearing in Velo’s paintings and applied artworks, and it is unsurprising that the Albanian artist recognised Moore as a soulmate. In an interview with the British Council in April 2014, Velo recalls that three years later, a friend gave him an English exhibition catalogue containing pictures of Moore’s drawings and sculptures – a publication that was strictly forbidden in communist Albania. This gift, and Velo’s dedication to the work of Moore and the Romanian modernist sculptor, Constantin Brâncuși, would have dire consequences for the artist.

In 1978, Maks Velo was arrested for showing “modernist tendencies” in his work. The book of Henry Moore pictures was found in his possession, and used as evidence for his subversive behaviour. For the next six months he was interrogated, before being found guilty and imprisoned for a further eight years. Most of his paintings and sculptures were destroyed and his beloved Henry Moore book was confiscated. After his release in 1986, Velo was sent to work in a factory in Tirana. From there, he was able to make it back to his birth city of Paris. A landmark exhibition of Henry Moore’s outdoor sculptures in Paris’s Parc de Bagatelle in 1992, finally gave Velo the opportunity to come face-to-face with the work that had so deeply affected his life. And despite the tragedy it had caused him, Velo’s love of Moore continued to thrive.

This story came to public attention in September 2013, when Moore’s prints and sculptures were finally publicly displayed in Tirana at the Albanian National Gallery of Arts, in an exhibition organised by the British Council. Two years later, Velo himself would enjoy a major retrospective in the same gallery, opening just days before his 80th birthday. As well as Paris and in England, Velo has now travelled to Cleveland in the United States and Düsseldorf in Germany to see Henry Moore’s work. For him, Moore’s sculptures “embody gentleness” and are “full of harmony, tranquillity and perfection.” Asked whether the work is revolutionary, Velo commented: “The term ‘revolutionary’ evokes terror. Communism destroyed many meanings. But any great art is revolutionary, is a step forward – and these steps have brought the world to a higher level. This includes Henry Moore.”

You can find out about Henry Moore’s importance as a Cold War artist in an earlier feature article on Espionart, and see more of Maks Velo’s work on his website. 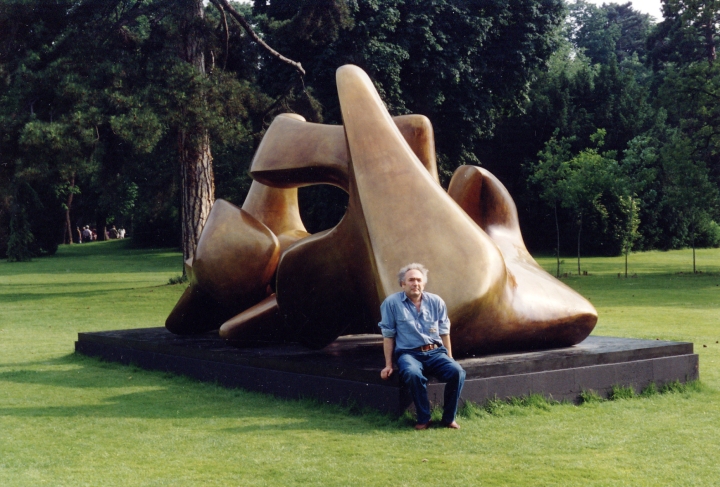 2 thoughts on “Henry Moore in Albania”