In the early 1960s, Brazil’s left-leaning president João Goulart made many powerful enemies with his attempts to reduce the exploitative practices of multinational companies, in favour of improving education and labour standards for the Brazilian people. Meanwhile, the US administrations of Kennedy and Johnson were anxious to see Goulart establishing diplomatic relations with Cold War enemies such as China and Cuba, and began to consider his hardliner right-wing opponents the lesser of two evils. On 31 March 1964, with the covert backing of the US government, the Brazilian armed forces led a successful coup d’état. Within two days, a military junta had assumed control of Brazil, heralding more than two decades of brutal repression that was marked by the systemic exile or execution of political opponents and other “undesirables”.

Artur Barrio had moved from Portugal to Brazil in 1955, aged ten years old. In the early years of the dictatorship, the young man trained as an artist at the School of Fine Arts in Rio de Janeiro, and watched with concern as civil liberties were eruded. Responding to the rise of paramilitary forces, who prowled the streets, “cleansing” them of homeless adults and children, while student activists, artists and intellectuals started to “disappear”, Barrio created a series of site-specific conceptual artworks in 1969 and 1970, that remain among his best-known projects. Over the course of six months, Barrio made hundreds of “bloody bundles” (trouxas ensangüentadas), which he left in public spaces for people to interact with. The artist conceived of these unwitting individuals as participants in the artwork. Rather than transporting them out of their present reality, as art has often aimed to do, Barrio intended that his objects should open people’s eyes to their current situation, by provoking a sensorial response that would force viewers to confront the atrocities committed by the military regime.

In November 1969, Barrio created the first of his Situation (Situação) works, at the Museum of Modern Art in Rio. Titled Situação … ORHHH … ou … 5.000 … T.E … EM … N.Y. … City … 1969, the project evolved over the course of a month, as Barrio placed around the interior of the museum white cloth bags containing concrete and crumpled newspapers to which he eventually added bloodied animal meat. The artist noted the reactions of visitors: some would add their own rubbish or even cash to these oozing piles, while others covered the bags in swear words. At the end of the exhibition, Barrio moved the bundles to the museum’s sculpture garden, where they caught the attention of the local police and were promptly disposed of as garbage. 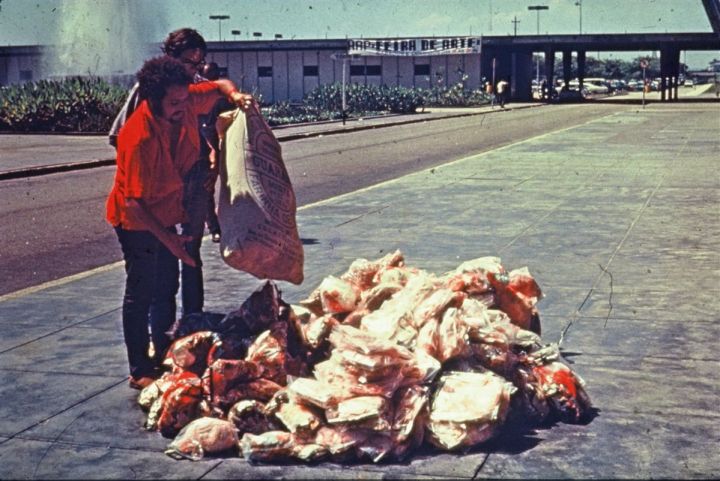 The following April, Barrio developed this guerrilla-style artistic strategy to produce two ambitious and shockingly visceral “situations” on the streets of Brazil. Defl … Situação … +S+ … RUAS took place in Rio de Janeiro in the first half of April, when the artist walked around the city, leaving behind 500 plastic bags containing animal blood and bones, nails, saliva, hair, urine, feces, paper, sawdust and food waste. The creation of the work and the reactions of passersby were documented by photographer César Carneiro. On 19 and 20 April 1970, Situação T/T took place in the Brazilian city of Belo Horizonte. This project formed part of a four-day happening entitled From Body to Earth (Do Corpo à Terra), organised by Frederico Morais and comprising subversive actions by a number of artists. Barrio anonymously placed bloody bundles in the municipal park and the dried bed of the Arrudas river, as well as unfurling sixty toilet rolls on the banks of the river that highlighted its use as an open sewer. The bags once again contained decomposing animal meat and bones, as well as clay, foam, clothing, wires and knives. The artist intentionally removed any signs that the objects constituted an artwork, and in the current climate many members of the public mistook them for dismembered human body parts. The police force and fire department once again removed and disposed of the mysterious objects, while Carneiro secretly recorded their perplexed reactions.

Perhaps due to the artist’s awareness of the dangers of his involvement coming to the attention of the authorities, Situação T/T would mark the last of Barrio’s “situations”. As censorship and political repression in Brazil became increasingly inescapable, Barrio left for Europe in 1974, where he has continued to produce anti-establishment installation works constructed from the discarded materials of daily life that create surprising and sensory interactions with the public.

Barrio’s Situation works are discussed alongside pieces by other politically-engaged Brazilian artists working in the 1960s and ’70s in the book Brazilian Art under Dictatorship: Antonio Manuel, Artur Barrio, and Cildo Meireles by Claudia Calirman (Duke UP, 2012). You can read part of the book online here.