On 15 September 1959, Nikita Khrushchev became the first Soviet leader to visit the United States. Over the course of 12 days, he travelled from Washington, DC to New York, Los Angeles, San Francisco, San Jose (to witness the birth of the computer age at IBM’s headquarters), Des Moines and Coon Rapids in Iowa, and Pittsburgh, ending his whistle-stop tour in a summit with President Eisenhower at Camp David. The visit followed hot on the heels of a summer of friendly competition between the two superpowers, where art became a major talking point at the Soviet Exhibition of Science, Technology and Culture in New York and the American National Exhibition in Moscow.

Coming soon after his infamous showdown with then-Vice President Richard Nixon in the “Kitchen Debate” in Moscow, Khrushchev appeared keen to use the visit as a chance to reclaim Soviet dominance in all fields. He made an opening volley soon after his arrival, greeting Eisenhower in the Oval Office with a replica of Lunik II. This space probe – the first man-made object on the moon – had successfully landed just one day earlier, symbolising the Soviets’ early lead in the Space Race. 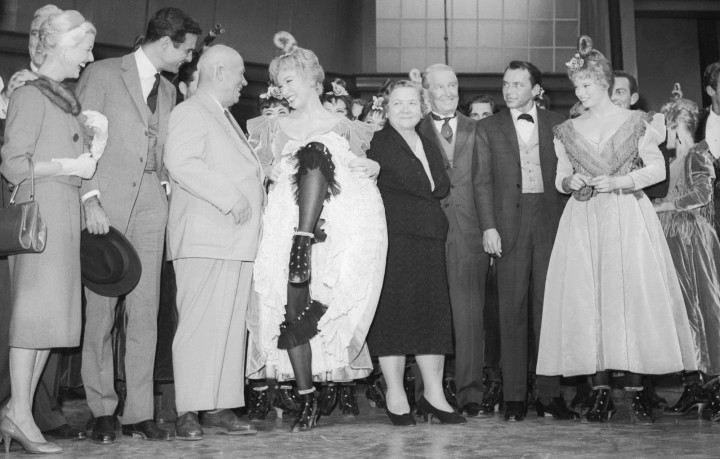 Khrushchev then proceeded to express displeasure at much of what he saw in the United States: complaining that the pigs were too fat and the turkeys too small at a farm in Maryland; remarking upon his first glimpse of the Empire State Building that “if you’ve seen one skyscraper, you’ve seen them all”; and – despite enjoying a close-up of Shirley MacLaine’s legs – bemoaning with characteristic Soviet prudishness the bare flesh and innuendo on a Hollywood film set. His ire reached fever pitch when he discovered that Disneyland had been taken off his itinerary because of security concerns. Shaking his fist in front of a gala audience that included Frank Sinatra, Elizabeth Taylor and Marilyn Monroe, Khrushchev vented, “Do you have rocket launching pads there? … What is it? Is there an epidemic of cholera or plague there? Or have gangsters taken hold of the place that can destroy me? And I say I would very much like to go and see Disneyland. For me such a situation is inconceivable.”

However, Khrushchev finally found something that pleased him at an Iowan meat-packing factory. Upon trying his first hot dog, the Soviet leader declared, “We have beaten you to the moon, but you have beaten us in sausage making.”

Upon leaving New York, Khrushchev had noted his regret that he had yet to meet “the producers of its wealth” – ordinary American workers. He would finally have a chance to come into contact with more ideologically appealing citizens in San Francisco, where he met union members and swapped caps with a dock worker. It is likely at one of these events that Khrushchev received three social realist prints by American artists affiliated with the Graphic Arts Workshop (GAW), a radical printmaking cooperative. Formed as an offshoot of the defunct California Labor School, GAW had a history of producing posters for Communist front groups and painting murals around San Francisco, on themes such as African American, Jewish and Mexican history, the role of women in the labour movement, and the execution of Julius and Ethel Rosenberg.

In keeping with Khrushchev’s appeal to see the “real” America, artists Richard Correll and Stanley Koppel gifted the Soviet premier artworks on the theme of blue-collar workers; while GAW chairman Irving Fromer presented the Soviet leader with a more controversial view, in a lithograph depicting child labour in the cotton fields. The prints are now held in the collections of Brown University, where Khrushchev’s son, Sergei, worked for many years and gifted his papers, including some of his father’s memorabilia.

While the Graphic Arts Workshop may not be well-known in the United States, during the late 1950s, the studio was feted in the USSR. The quixotic San Francisco sculptor, Beniamino Bufano, had taken a collection of prints by GAW members on his “one-man peace mission” to Moscow in 1957, where they were soon exhibited at the Moscow Artists’ Union and the State Pushkin Museum of Fine Arts. The GAW prints would also be included in a larger exhibition of American realist art at the Pushkin Museum in late 1959, rapidly assembled by Soviet officials nervous at the attention paid to US modern art by the crowds at the American National Exhibition that summer.

For those keen find out more about Khrushchev’s tour of America, PBS has put together a handy overview of his itinerary, as a complement to their film, Cold War Roadshow. You can also find out more about the surviving Graphic Arts Workshop at their website.