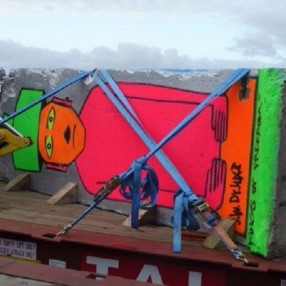 Since the night the wall came down – in November 1989 – pieces of the Berlin Wall have travelled far and wide. Over forty countries now host sections of the wall, from Italy and the Vatican to Singapore and South Africa. Along Wilshire Boulevard in Los Angeles, several sections face out onto the Los Angeles County Museum of Art, in an installation arranged by the … END_OF_DOCUMENT_TOKEN_TO_BE_REPLACED

“We enjoyed painting a line through that one!” The German journalist and author, Frank Willmann, recalled with glee the moment in 1986, when he and four friends daubed white paint across Keith Haring’s iconic Berlin Wall mural. This iconoclastic act was part of an art-activist stunt that stretched 3 miles along the infamous structure. Since the wall was suddenly erected on 13 August 1961, to separate … END_OF_DOCUMENT_TOKEN_TO_BE_REPLACED

What: Florian and Michael Brauer and Edward Anders, Mauerspringer (Walljumper), 2009 Where: Brunnenstraße, Berlin, Germany In June 2009, a few months prior to the 20th anniversary of the fall of the Berlin Wall, a new sculpture appeared on the streets of the German capital. Mauerspringer (Walljumper) by Florian and Michael Brauer and Edward Anders depicts a life-sized East German border guard named Conrad Schumann, in … END_OF_DOCUMENT_TOKEN_TO_BE_REPLACED

On 9 November 2014 the world looked back to the momentous day, 25 years earlier, when the Wall came down. French street artist Thierry Noir is credited as the first person to paint on the Berlin Wall, in April 1984. Noir had moved to the west side of the city two years earlier and was living in a squat that overlooked the infamous crossing. Saddened … END_OF_DOCUMENT_TOKEN_TO_BE_REPLACED

What: Christoph Zwiener, ADN Pfoertnerhaus (ADN Guard House) Where: 9300 Culver Boulevard, Culver City, LA – until 2 November 2014 To mark the 25th anniversary of the fall of the Berlin Wall on 9 November 1989, Los Angeles is the temporary home of a GDR surveillance booth. German artist Christof Zwiener has reimagined the 1970s guardhouse as an art installation, with the 2 by 1 … END_OF_DOCUMENT_TOKEN_TO_BE_REPLACED

A recent exhibition at the Musée d’Art Moderne de la Ville de Paris highlighted the significance of Keith Haring as ‘a subversive, militant Pop icon’. The American artist used his apparently infantile and comic images of stick men and barking dogs to engage with challenging political themes as he campaigned tirelessly for social justice and the freedom of the individual. Imbued with the street culture of 1980s’ … END_OF_DOCUMENT_TOKEN_TO_BE_REPLACED

The German Democratic Republic (GDR), known as East Germany, was founded on 7 October 1949. It was at the 30th anniversary celebrations of the communist state that Soviet leader Leonid Brezhnev was famously snapped locking lips with GDR premier Erich Honecker, and the photo promptly appeared on newspaper front pages around the world. In 1990 the iconic image was reimagined as a graffiti painting on the … END_OF_DOCUMENT_TOKEN_TO_BE_REPLACED

On 13 August 1961 construction started on the Berlin Wall, tearing apart the German capital. For the next 28 years, the Wall would be a symbol of Soviet oppression and a literal representation of the ‘Iron Curtain’ between East and West. With the rise of the graffiti art movement in the 1980s, the West Berlin side of the Wall became a Mecca for street artists. Keith … END_OF_DOCUMENT_TOKEN_TO_BE_REPLACED