Operation Urgent Fury, the controversial US-led invasion of Grenada, concluded with a decisive victory for the United States on 15 December 1983. The Reagan administration claimed that this action, the country’s first major military operation since the end of the Vietnam War, was launched in response to appeals for help by Grenada’s neighbouring islands. However, it has also been widely argued that the campaign was instead a ploy aimed at quashing Cuban and Soviet influence in the Caribbean.

In the aftermath of the invasion an aggressive piece of artistic propaganda appeared in support of the official line. GRENADA: Rescued from Rape and Slavery, a 14-page comic book, was printed in its thousands and airdropped over the island. The eye-catching, brightly-coloured pamphlet presented Operation Urgent Fury as a glorious defence of democracy by the United States, reimagining its military not as invaders but as liberators from “imminent totalitarian danger”.

The comic was ostensibly sponsored by the fictitious organisation V.O.I.C.E. (Victims Of International Communist Emissaries) … but it later transpired that the book had in fact been produced by the CIA. The agency had secretly commissioned Malcolm Ater of the Commercial Comics Company in Washington, DC to write the script, with illustrations provided by veteran comics artist Jack Sparling. 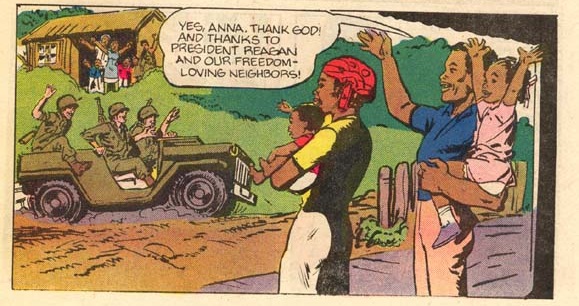 A PDF version of the full comic book is available for free download from the Government Comics Collection at the University of Nebraska-Lincoln.

5 thoughts on “The CIA Comic Book Airdropped Over Grenada”